* [How do Alolan evolutions work?](#alolan) * [How are colorless energies used?](#colorless) * [Special Conditions](#conditions) * [How does Robo Substitute work?](#robo_substitute) * ["The Defending Pokemon" vs "Your Opponent's Active Pokemon"](#defending_vs_active)

How do Alolan evolutions work?

* There are some circumstances where a non-Alolan Pokemon can evolve into an Alolan Pokemon, such as Alolan Raichu. 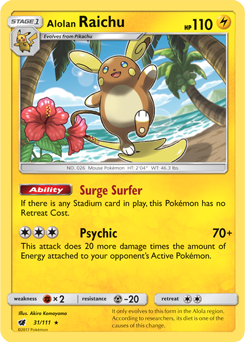 How are colorless energies used?

How does Robo Substitue work?

“Robo Substitute is considered a Pokemon rather than an Item card while it is in play. While in your hand, deck, or discard it’s considered an Item, but once it’s been “played” it becomes a Pokemon in all respects. You can even attach tools and energy to it, though that’s probably pointless since it has no attacks. The only differences between Robo Substitute and an ordinary Pokemon (after it’s been played) are that it can’t retreat, your opponent takes no prizes for knocking it out, and you may discard it at any time before you attack. Once it’s in the discard, it’s no longer “in play” and reverts to being an Item. However, since it is considered a Pokemon while in play, if your only “real” Pokemon is KOed, the game isn’t over, you promote a Robo Substitute to the active, and play continues as normal”

"The Defending Pokemon" vs "Your Opponent's Active Pokemon"

Is there a difference between “the defending pokemon” and “your opponent’s active pokemon”? This came about when using Cobalion’s Iron Breaker move, which does 80 damage and reads “The Defending Pokemon can’t attack during your opponent’s next turn”. See the card here.

If you consider this to mean any pokemon your opponent puts into play, then Cobalion would not be attackable until removed from play.

If you consider this to mean only the current pokemon defending against Cobalion’s attack, then this attack stopping move can be manuevered around by your opponent switching their pokemon out.

I think the second scenario is the correct ruling. Here is some other opinions on the ruling:

I believe there is some functional difference between the two. One of them is referring to the specific Pokemon the effect is used on, the other one refers to whatever Pokemon is in your opponent’s active slot. I am not sure which is which though, nor if this is even correct